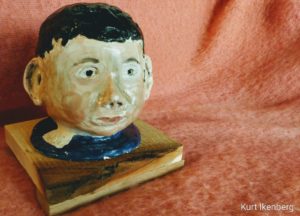 ‘GenTalk’ at the Famillement conference, 3 June 2018 in Leeuwarden, The Netherlands
Translated from Dutch by the author

What is special about Jewish genealogists and writers on family history? To their non-Jewish colleagues, having an extended ‘hinterland’ is no big deal. They grew up with grandpa’s and grandma’s, uncles and aunts, nephews and nieces. Not us. END_OF_DOCUMENT_TOKEN_TO_BE_REPLACED

All that remains: four pictures of the De Jonge family that lived in Groningen (Netherlands) at Folkingedwarsstraat 5. Parents, two children and a son-in-law and grandchild Eva born in February 1942, all murdered in Auschwitz. After November 1942 no one was left to tell. The four pictures were waiting in a tinplated box, I need to show them. END_OF_DOCUMENT_TOKEN_TO_BE_REPLACED 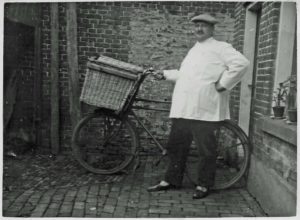 A happy occasion: five years ago today, this trilingual website went on-line. During this period 24 stories have been published in English, 21 in Dutch and 8 in German. Thus the histories of the Löwenhardt, De Leeuw, Ten Brink and Weijl families have been preserved for posterity – with the help of archiving by the Netherlands Royal Library. At the foot of this first milestone we find a small surprise: END_OF_DOCUMENT_TOKEN_TO_BE_REPLACED

Surprising ads in Holland’s oldest weekly, the NIW (New Jewish Weekly, founded in 1865 and still going strong today). They tell me that from 1904 or earlier my great-grandfather Isaac de Leeuw Az. 1 was kosher butcher in the Holtjesstraat in my hometown Almelo. In the ad he proclaims to be the one and only butcher in town working under rabbinical supervision, thus trying to enlarge his clientele. END_OF_DOCUMENT_TOKEN_TO_BE_REPLACED

Who was Freddie? Why should I care who he was? He was one of the very many cousins of my father Heinz Löwenhardt (1913-1989). Since both lived in Dortmund, Germany, until the mid-1930s, they will have met more than once. I never heard my father talk about Freddie – but then, neither did he talk about other relatives. Most of them had been murdered by the Nazi’s. That Freddie was special I learned only in 2011 when his brother Hans-Georg (1924-2016) established contact with me. Together they had managed to escape from Nazi-Germany in March 1939. The two boys were saved, their parents and sister Ursula (Ulla, 1930) were murdered in Auschwitz in October 1944.