Seventy-five years since the liberation of my home town Almelo (The Netherlands) I write about the hiding of my parents and many other Jews in the town. For more than two and a half years they had to hide until Canadian troops came to liberate them.

At the moment when I am writing this, almost all European citizens are under house arrest in a more or less strict sense. In this unexpected pandemic, unheard of in modern times, the virus forces us to stay at home. With our partner and children or alone, we are locked up.

Our predicament raises questions about being in hiding during the Holocaust. I remember stories of Holocaust survivers about their liberation when finally, at last, they could talk aloud after having had to whisper for months and years on end. That was some sort of liberation! Can you imagine? Or of finally, at last, being able to put on their shoes after having to walk on their stockings for months and years on end. Can you imagine?

Today we can hope, we can fool ourselves, we can expect on the basis of hard facts – but we have no certainty whatsoever. The virus calls the shots. The virus reigns. During the Holocaust, Jews in the extermination camps watched the condensation lines in the sky and wondered whether someone would come to their help. Now, we watch a blue sky without any condensation line. When will it end? When will ‘normalcy’ return? [BTW: I am in favour of a large reduction in the number of condensation lines during ‘normalcy’]

But the differences outnumber this one similarity. Today’s house arrest is physical exclusively. Thanks to electronics we are in permanent relation to each other and to the world. This has its advantages but it can also be burdensome. Events take place that you rather not know, for the sake of your own mental wellbeing. A Mensch (good person) must not look away… but seeing everything is unbearable.

‘Then’ the average Jew in hiding had no knowledge of what happened day in day out in Auschwitz-Birkenau. There was a suspicion that it was not a healthy place to be, to say the least. But the cold blooded industrial destruction of human beings was beyond imagination. Now we are bombarded with real-time images, colourful and moving, of dying  people and intolerable suffering.

And another difference: we spend our house arrest more or less comfortably in our own homes. We do not have to live with strangers of whom we are dependent. We do not need to fear treason. We are not being moved in the dead of night to a different home because our hiding place is in danger of being found out. In our own homes, we feel pretty safe. And – we have food and drink and plenty of toilet paper. 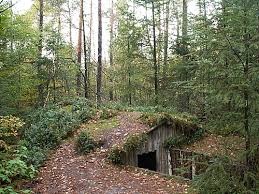 T’was some sixty years ago, or thereabouts. I am eight, ten years, twelve perhaps. In the nightstand in my parents’ bedroom I find a mysterious document. It is a stack of carbon copies of typed sheets. ‘General Police, Gelderland Province. Political Branch’ is printed in the left upper corner.  END_OF_DOCUMENT_TOKEN_TO_BE_REPLACED