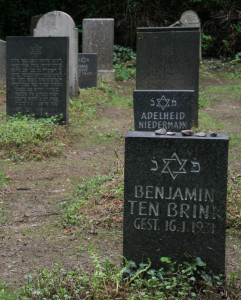 Löwenhardt, buried here in 1933. I am roaming the gravesite and suddenly I stumble upon a simple gravestone that gives me a shock. END_OF_DOCUMENT_TOKEN_TO_BE_REPLACED

PLETTENBERG was still on my to-do list. One of the few family related towns I had never visited. It is the birthplace of my great-grandmother Pauline Lennhoff. From Plettenberg in Nordrhine-Westfalia she moved some thirty kilometres north and settled in Oberhemer with Levi Löwenhardt. Between 1873 and 1892 they had twelve children, nine boys and three girls. In May 1933 Pauline died and was buried in the Jewish cemetery at Dortmund-Wambel, 85 years old. When five years ago I visited her grave, it was obvious: nazi thugs had fired bullets at her tombstone. But she was spared the horrors of the Holocaust. END_OF_DOCUMENT_TOKEN_TO_BE_REPLACED

For the introduction to this story, please click here

The pictures of ‘Aunt’ Clara and myself have been preserved in a photo album made by my parents and documenting the first two years of my life. END_OF_DOCUMENT_TOKEN_TO_BE_REPLACED