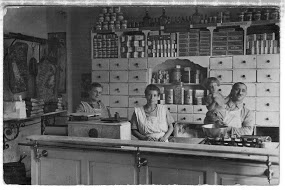 Hermann Kleeblatt died in Bergen-Belsen concentration camp, in its section named Sternlager, ‘Star Camp’. He was seventy years of age and the last of his family to fall prey to the Nazis. All were dead: his son Arthur with his own family in Auschwitz, September 1942; his son Walter in Sobibor (April 1943) and his wife Lina who had died in Westerbork Transit Camp in The Netherlands on 28 December 1943. The youngest son, Richard, born in 1906, was the only one to survive.

Hermann was brother to my great-grandmother Hannchen ten Brink-Kleeblatt (1861-1930). Most likely he was also the person who introduced her oldest daughter Julia to his young neighbour in Dortmund-Lindenhorst, butcher Adolf Löwenhardt. Julia and Adolf married in 1912.

In official documents such as the Gedenkbuch (‘Memorial Book’) of the German National Archives, Hermann is listed to have died on 12 September 1944. That was his seventieth birthday… which made me suspicious. A coincidence? Would he really have passed away on his seventieth birthday? Bergen-Belsen was not an extermination camp but it knew extreme hunger and a deadly typhus epidemic. Whoever was weak or lost hope, whoever gave up the fight to survive, whoever became apathetic, died. Had Hermann Kleeblatt lost all hope on the eve of his birthday?

Reading the book by historian Evelien Gans on Jaap and Ischa Meijer made me write to the Bergen-Belsen Memorial in Germany. In her book, Gans presents an extensive impression of ‘life’ in the Sternlager. But was Hermann really housed in this part of the camp? And why in Bergen-Belsen after all? It was a so-called exchange camp, meant for Jews, mainly from The Netherlands, who the Nazis planned to exchange against Germans from abroad. Hermann was the only member of my extended family who ended up in Bergen-Belsen. Why?

The name Sternlager refers to the fact that its inmates were allowed to wear their civil clothes but had to carry a ‘Jew star’ on their chest. Family members could stay close to each other and for the elderly, there was a separate barrack, the ‘Altersheim’. Is this where they would have put Hermann?

On 24 February 2014 I receive an email sent by Elfriede Schulz of the Bergen-Belsen Memorial. She has been so kind to research Hermann Kleeblatt’s stay at the camp. To my question of why he was sent to Bergen-Belsen she has no answer. It remains a mystery. But she confirms that he was indeed in the Sternlager. And then her surprise: Hermann died on 2 January 1945, having stayed in the camp for eleven months. This is shown on a list made by Josef Weiss.

For four months in late 1944 and early 1945, Josef (‘Jupp’) Weiss (1893-1976) was Judenältester, ‘Senior Jew’ or leader of the Jews in the Sternlager. Weiss, too, had fled Germany for The Netherlands and had been deported to Bergen-Belsen via Westerbork Transit Camp. He had been at Westerbork for twenty months when on 29 September 1943 Hermann and his wife Lina arrived. Lina died three months later, and on 11 January 1944 Josef Weiss and his family were deported to Bergen-Belsen. Hermann Kleeblatt, now a widower, was put on the next transport, on 1 February. Hermann and Josef may have known each other. Both had come from North Rhine-Westfalia and their deportation histories showed partial overlaps.

Both during and after the war, Weiss enjoyed an excellent reputation. As ‘Judenältester’ he was the pivot between the camp commander and the inmates. Some predecessors had abused this position, but in his behaviour ‘Jupp’ Weiss showed to be a ‘Mensch’ who was respected by both inmates and camp guards. Every day he used to walk alongside the cart on which Sternlager’s deceased were taken away, saying kaddish.

Weiss kept secret lists, one of these with names and dates of the deceased. This list shows Hermann Kleeblatt, born 12 September 1874 and died 2 January 1945. Two months down the same secret list are Margot Frank and her sister Anne.

Josef Weiss himself died in Jerusalem in 1976, aged 83. The day of his death was 12 September, Hermann Kleeblatt’s birthday. 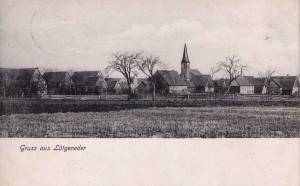 For ten years longer than she lived my great-grandmother Hannchen has lain at the ‘youngest’ Jewish cemetery at De Knik in Denekamp. She died on 18 October 1930. For forty years she lived at the spot now occupied by the Blokhuis butcher’s shop – bearing six children – with her husband Isaak ten Brink, cattle dealer, butcher and pub landlord. END_OF_DOCUMENT_TOKEN_TO_BE_REPLACED 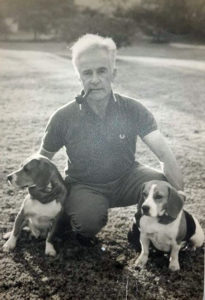