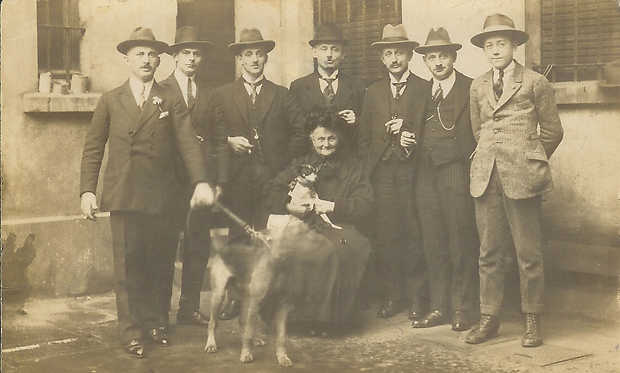 One of the pictures from the family archives: seven men and two dogs with the widow Pauline Löwenhardt-Lennhoff (76) in the middle. This is what someone wrote to her on the reverse side of the picture:

Twenty-seven grandchildren in 1924… and Pauline lived for another nine years. How many grandchildren would she have had? Apparently the men in the photo came to celebrate her 27th. And who was that?

Pauline herself had twelve children, nine sons and three daughters, the youngest born in 1892. Siegmund – left in the picture, holding the lead of a large dog – was the next to youngest. He is 34 years and the only man with a carnation buttonhole – which is significant as his first son, Hans-Georg, had been born eleven days earlier giving Pauline her 27th grandchild. Siegmund ran an elegant menswear shop in Dortmund-Hörde and, judging by their smart outfits, the brothers enjoyed a family discount.

Third from left is Adolf Löwenhardt, Pauline’s eighth child and six years senior to Siegmund. Third from the right, with a moustache, is Emil, Pauline’s fifth child. At the extreme right is Saly Löwenhardt then 16 and a son of Pauline’s second child, Isidor. Thirteen years later Saly would marry Jeanne van Koppelen in Rotterdam; their daughter, Elly Löwenhardt, was born in 1942. The three remaining Löwenhardt men in the picture have yet to be identified.

Almost ninety years after the photo was taken I skype with the man whose birth was being celebrated. He now lives in South Africa. On 19 March 2011 he left a note on my website. Up to that moment I was quite sure that his parents Siegmund and Margarete had only had one child, Ursula Berta, and that all had been killed in Auschwitz on 23 October 1944. But from George I learned that he (then by the name Hans-Georg) and his brother Manfred had left Dortmund just in time. On 3 March 1939 they had arrived in London on one of the Kindertransporte from Germany.

Back to Family Album