The photo as almost certainly taken in spring 1930. It is a black-and-white portrait, apparently of reasonably well-off middle-class family. The photo belonged to my father, Heinz (in the middle of the back row) who was then almost 17. His hairstyle must have been the current fashion in the Ruhr area – short, combed flat with a parting, leaving both sides of the head virtually bald. For anyone who knows what will happen in just a few years it looks frighteningly teutonic. Heinz looks straight ahead, and he is not the only one. His grandparents sit in front of him, with his aunts, uncles and parents on either side – and in front of them four boys are seated on a rug.

Seventeen people are posed in the photo. They have come to Denekamp for the occasion, from Almelo, Enschede and Dortmund. But why? – judging by their faces it is more likely to have been a funeral than something joyful. Even so this photo in probably the only surviving witness to the ruby wedding celebrations of my great-grandparents, Isaak ten Brink and Hannchen Kleeblatt, who were married in 1890.

A careful study of the upper edge of the photo shows the lower third of seven letters on the window above the doorway: LAGERIJ. The initial S (making ‘butcher’ in Dutch) is either missing or not visible. Joods leven in Denekamp contains a facsimile of a testimonial written on 28 July 1934 for a Miss G. Schiphorst who ‘was in his service for 5 consecutive years, showing unfailing honesty and loyalty both in the housekeeping (for which she was solely responsible), and as an assistant in the business.’ I am not a little proud to see that in 1934 my great-grandfather had a firm, regular and legible, slanting hand, in excellent Dutch. He signed the testimonial with

My great-grandfather Isaak was a cattle trader and – to my surprise – also ran a pub in a part of town then known as the Achterste Brink. It was an elegant combination as deals used to be sealed with a handshake (or clink of glasses) in a bar. It was only later that he started a butcher’s shop, possibly next to the bar – although not later than 1930. And this is where the photo was taken, right in front of the Ten Brink bar/butcher’s shop. To the left of the entrance is a virtually illegible enamel advertising board, apparently promoting Almelosche Bieren (Almelo beers). Indeed, at that time a gentleman by the name of Hagendoorn had a brewery and lemonade factory in my hometown. 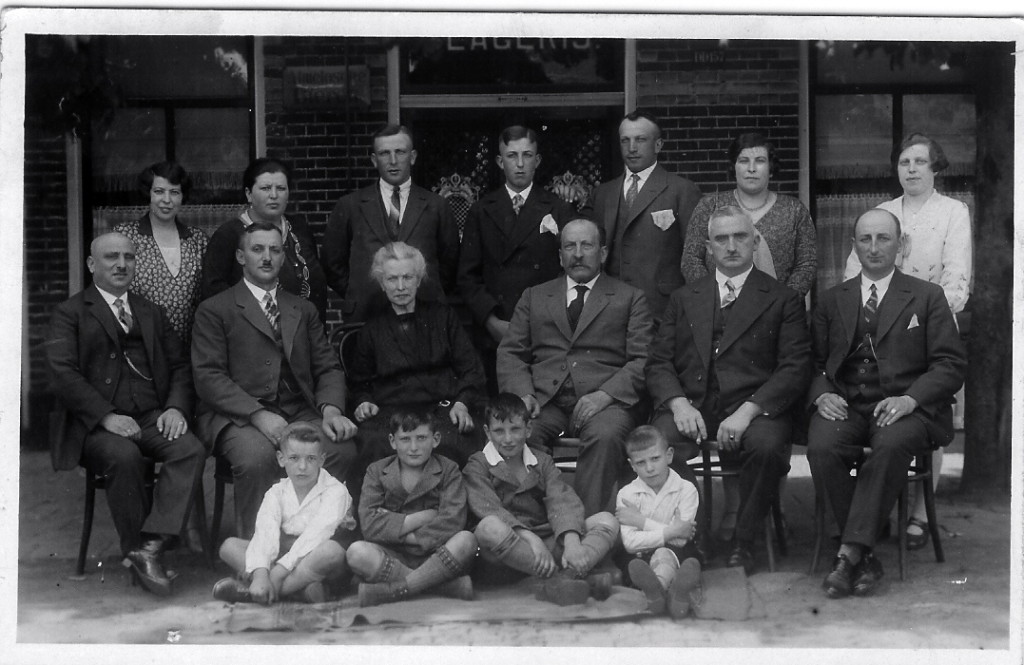 There are seven people standing in the back row. In front of them there are six people seated on Thonet chairs. And right in front are four young boys sitting on the ground. The ruby wedding couple are at the centre, leaning slightly apart – the seemingly fragile Hannchen to the left, the substantially built Isaak to the right. Her hair is bushy and grey, and the front half of his head is bald. They are flanked by two men and three men are standing behind them – two women each on the left and right closing the ranks. Interestingly the ruby couple’s married daughters stand on the back row with their husbands seated in front of them.

Five women, eight men and four boys. The entire family encapsulated in the carefully composed symmetry of a dignified photograph. All the men wear ties and three have a display handkerchief. They also wear waistcoats underneath their jackets (possibly not my father given his young age). With three of the men one sees a gold watch chain between coat and waistcoat, no doubt leading to a watch; I still have my grandfather’s. My great-grandfather is the only one of the seated men not to have unbuttoned his jacket which is tight across his abdomen and hides the gold chain.

The choreography behind the photo and the moment the shutter fell is tangible. Who was the director – the anonymous photographer – maybe one of the family – or several together with all the inevitable frictions? Perhaps this accounts for everyone’ s fixed stare, with the exception of the third boy from the left – but I shall never know.

At the centre of the picture is the ruby couple, surrounded by their four married daughters, two bachelor sons, four sons-in-law and five grandsons. The daughters stand on either side. In front of them are their husbands, two-by-two flanking the couple. In the middle at the rear is their oldest grandson, on the borderline between adolescence and adulthood, between his to bachelor uncles. And in front are the four youngest grandsons. On further consideration the symmetry of composition is anything but coincidental.

The back row with the four daughters and two sons also dictates the order of the front row containing the daughters’ husbands. Some thought must have been given to placing the children by seniority with, from left to right – Julia, Rosalie, Mauritz, Zelma, Julius and Adela. But if Heinz had to go in the back row – and where else? – where would they put Mauritz and Zelma? Clearly they opted for symmetry: Heinz between the two bachelor sons in the middle of the back row, with the daughters at the end of the row. But there is still one false note: in this situation the order I’d expect – Julia after all being the eldest girl – would be Julia, Rosalie, Mauritz, Heinz, Julius, Zelma, Adela. Why is Rosalie on the far left followed by Julia? Once again, I shall never know.

Wife and husband Rosalie (38) and Josef (53) Rosenbaum are on the left. They have come over from Dortmund. Their eight year-old son Walter is in front on the right. Next to Rosalie stands my grandmother Julia, in front of her husband Adolf Löwenhardt. At the time the photo was taken Julia was 40, as old as her parent’s marriage. Adolf was 46. They also live in Dortmund. And behind the ruby couple are the three bachelors, two sons with the oldest grandson in between: Mauritz (36), Heinz (16, son of Adolf & Julia) and Julius (32). To the right is their third daughter Zelma (34) who is married to the seated Abraham de Leeuw (44). They live in Enschede. And, lastly, on the far right there is the fourth daughter, Adela (28) with her husband Iwan de Leeuw (36), from Almelo. With the exception of Josef all the men are cattle traders or butchers – or both. As well as being homemakers their wives also help in the shop. Bram and Iwan de Leeuw, the two sons-in-law, are cousins and part of the De Leeuw family from Almelo; they are married to the two Ten Brink sisters. Iwan is also a younger brother of Arnold de Leeuw who owns Slobian-Bielaja.

In front, far left, wearing a white shirt and a quiff is Adolf and Julia’s youngest son, Werner, aged ten. He and my father are only two out of the seventeen that I actually met. Werner died in 2006 at the age of 86. Seated next to him are the brothers Maurits and Izaak de Leeuw – sons of Zelma and Abraham from Enschede. Izaak, who was born in August 1921, is probably seated immediately next to Werner, with Maurits to his left (the boy with a white collar and the early stages of a smile). The photo was taken when he was twelve.