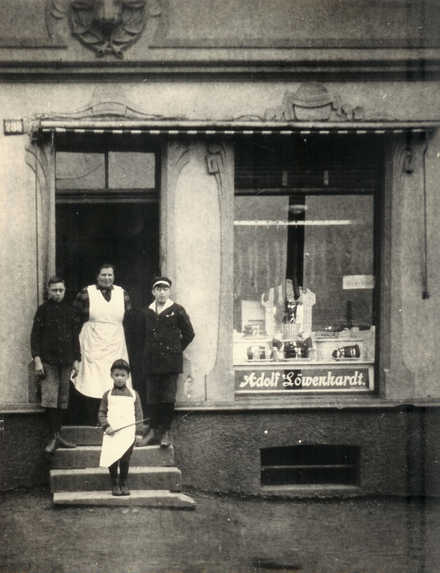 My limited sources showed that Adolf Löwenhardt married Julia ten Brink from Denekamp in the Netherlands, most probably in summer 1912. They moved in Lindenhorster Straße 235, which was owned by the next-door grocer, Hermann Kleeblatt (born in Lütgeneder on 12 September 1874). Lütgeneder was also the birthplace of Julia’s mother Hannchen ten Brink-Kleeblatt – who was Hermann’s niece.

Heinz (right, wearing a cap), the eldest Löwenhardt son, was born in summer 1913. Two weeks before his first birthday his father was mobilized in the German army and for the next three years of war Julia was sole carer for her young son and the butcher’s shop – possibly helped by a butcher’s boy. In June 1917 Adolf returned from Lorraine as a 30 per cent disabled veteran. A second son, Werner, was born more than two years later – in the photo he is in front of his apron-wearing mother. Both boys attended the elementary school (Volksschule) opposite their home, where they were taught by Fräulein Ehrlinghaus.

Julia’s mother, Hannchen, died in Denekamp in October 1930. In this period, the early years of the decade, turnover at Löwenhardt’s butcher’s shop was falling by some twenty-five percent a year due to economic malaise. And then in spring 1933 the Nazis launched a smear and confiscation campaign targeting Jewish retailers. In August of the same year Adolf was forced to sell his shop to an Aryan. Deprived of his business, he had to make a living at the Dortmund abattoir. Three years later, Adolf and Julia fled to the Netherlands, the route already taken by their two sons.

Two Stolpersteine (memorial stones) were placed at little Werner’s feet in February 2008. Neither Adolf nor Julia survived the shoa.

[The identity of the boy, left, on the stairs is unknown]

Back to Family Album