‘GenTalk’ at the Famillement conference, 3 June 2018 in Leeuwarden, The Netherlands
Translated from Dutch by the author

What is special about Jewish genealogists and writers on family history? To their non-Jewish colleagues, having an extended ‘hinterland’ is no big deal. They grew up with grandpa’s and grandma’s, uncles and aunts, nephews and nieces. Not us.

I now have three grandchildren. One has two pairs of grandparents. She knows all four of them. The other two have no less than three living granddads and four grandmas. They even have memories of their great-grandmother who died a few years ago. I never knew my four grandparents, they had been murdered three years prior to my birth. Instead, my sister an I had surrogates: ‘aunt’ Grada and ‘grandpa’ Ottema, her father, who during the Holocaust had provided our parents with a hiding place. Our parents survived, the large families from which they hailed did not.

The numbers are well known in The Netherlands of today (to those who want to know), and the public discussions on these numbers continue. Nowhere in Western Europe, the percentage of Jews murdered by the Nazi’s was as high as in The Netherlands. The number of Dutch citizens killed in World War Two – military and civilians including Jews – was just below 200,000. This was about 2.3% of the entire population. For the Dutch-Jewish community, the percentage was… 73. In Belgium, 40% of its Jews were exterminated, in France 25%, in Italy 20%. My generation of Dutch Jews grew up without family. 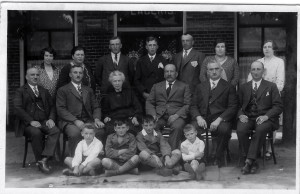 In Overijssel province, the percentage was 57; in Denekamp where my grandmother Julia was born (53 Jews in 1941) 72, the national average. 1 In the picture, you see my great-grandparents Ten Brink in Denekamp at the occasion of their 40th wedding anniversary in June 1930. My grandmother Julia is second from left in the back row. The picture was shot at the Denekamp ‘Brink’ in front of butcher store & café Ten Brink. Indeed, my great-grandfather Isaäk ten Brink (center) was cattle trader, butcher ánd innkeeper. And every day at dawn he laid his tefillin.

The picture shows the four daughters (standing in back row) with their husbands (seated in front of them), and the two as yet unmarried sons. Centre-back is the first-born grandson, seated at the front the other four grandsons. 17 people in toto. During my youth and later, of these 17 people I have known only two: my father Heinz (center-back) and his younger brother, uncle Werner, left in the front row. 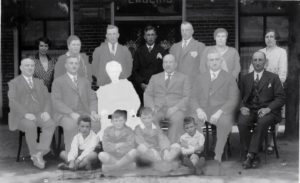 This adaptation documents the situation in 1945. Great-grandmother Hannchen at the centre had died a natural death half a year after the picture was taken. Two of five grandchildren and eight of eleven adults have perished in the Holocaust. A total of ten out of sixteen people.

Eight years ago my research started by analyzing this picture. People and stories have perished in the Holocaust, but quite a few family pictures have survived. Such as the 1935 wedding picture (not shown here) of Julius ten Brink, to the right of my father in the 1930 picture. 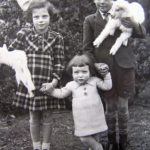 And this picture of the first child of Julius and his wife Hennie, born in Denekamp in July 1936. They named their first daughter Hannie (left). In October 1940 Hannie’s sister Lida Carla (center) was born. One year later the Nazi’s murdered their father in the gas chamber of Hartheim Castle near Mauthausen in Austria (read The death of Julius).

In writing Jewish family history one has to guard against excessive attention to the black pages, the Shoa or Holocaust. This short period is well documented whereas I am particularly interested in the preceding decades, say the 1850-1940 period. And for that period, sources are scarce.

And yet I’ve managed to document that my great-grandparents in the Twente region of the Netherlands had been fairly fromm (pious) and that some of them were distinguished members of their kehilla (local Jewish community). In New York City I tracked down the archive – and the gravesite – of Rosalie ten Brink who in October 1939 managed to escape to the US with her son Walter (read Walter’s forced wanderings). The archive was in her vanity bag, guarded since her death in 1965 by her grandson Joseph.

My grandparents De Leeuw, parents to my mother, and their son Johan were among the very few Dutch Jews murdered inside the borders of Holland. This happened on 31 October 1944 in the forests near Vierhouten. For a long time, I’ve wondered whether in 1914 they had had a khupah, a Jewish wedding. Proof of it I found rather by accident in a cash book (read Bridegroom money). All stories are here on this website. 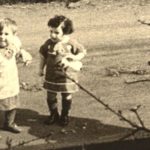 Sources are few and far between, but occasionally one is lucky. Several years ago I received this picture in the mail. It was sent by one of the sons of Doctor Dierick, the pre-war general practitioner of Denekamp. He wrote that the picture was a ‘still’; apparently, doctor Dierick had owned an 8-millimetre film camera. It took a while, but in the end, the movie was found in an attic in the town of Baarn. It had been transferred into VHS format.

On 4 February 2014, I collected the VHS tape. Hidden in a two-hour long compilation of family pictures of the Diericks was a fragment of 22 seconds showing their young daughter Clara (left in the picture) with her friend Hannie (right). The rest was organization and technology.

One week later I was pleased and moved to upload these moving pictures to Youtube. Thus I created a small monument to Hannie, in gratitude to the Dierick family. A monument not in marble or brass, not on paper or celluloid, but digital, floating in The cloud……