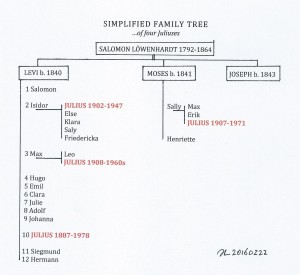 Considering the large number of family members, in itself it is not terribly surprising. But remarkable it is. During the first half of the 20th Century our family had four men named Julius. All were born in Germany, two of them lived in Israel for part of their lives.

Please scroll down for a PRINT button and response form. Descendants of any of the Juliuses are encouraged to get in touch with the author.

JULIUS I
The first Julius was born in Oberhemer, Germany, on 3 April 1887. He was the tenth child of Levi and Pauline Löwenhardt. In 1889 and 1892 he was followed by two more sons, Siegmund and Hermann. Julius I survived the Shoa, one of the few in the Löwenhardt family. He was lucky. But that is more or less all I know. After the war he lived in Mühlhausen in the GDR. Many years ago I met his daughter Ilse in Weimar – but I failed to ask her the proper questions. In the family archive I keep a picture and a short letter written by Julius I to me as a child, thanking me for my letter. My father visited him sometime later. Julius I died in Mühlhausen in October 1973.

So I could have met Julius the lucky one, in 1973 I was 26 years old. I regret I haven’t. I would have liked to ask him how he managed to escape the murderous naziregime. Or about his life with his two younger brothers in the Jewish Orphanage in Paderborn. After the death of their father in the late 1890s, the three youngest boys of the Löwenhardt family had been sent to Paderborn. They spent crucial years of their young lives among Jewish orphans, in the case of Julius from age 11 to 14, even though their mother was still alive. In 1903 their mother Pauline was the last to leave Oberhemer; she went to Plettenberg, the town of her parents. Six years later Julius (then 22 years old and listed as tradesman, Kaufmann) and his brother Siegmund (20, salesman, Verkäufer) lived with their widowed mother Pauline at Weiher Straße 70 in Dortmund.

JULIUS II
The second Julius Löwenhardt was born on 15 November 1902 in Sterkrade. Julius II was the first grandchild of Levi and Pauline by that name, and the first child of Isidor Löwenhardt and Emilie Aron. At that time Julius I, brother of Isidor, was fifteen years old and worked as an apprentice salesman (‘Kaufmannslehrling’) in Lüdenscheid, ninety kilometers to the southeast of Sterkrade; he had been discharged from the Paderborn orphanage in October 1901. Between 1904 and 1909 Julius II had three sisters (Else, Klara and Friedericka) and one brother (Saly).

After his secondary education, Julius followed vocational training at a technical college in Cologne. He specialised in plumbing and central heating. Julius II became a member of the Zionist youth movement Hechalutz and learned Hebrew. With his parents and siblings, he could not escape the virulent anti-Semitism and the outright persecution of Jews as soon as in 1933 Hitler had come to power. During the three years 1933-35 some 100,000 out of half a million Jews emigrated from Germany to safe havens elsewhere in the world. Julius was one of them. His younger brother Saly had left for Amsterdam in April 1933, Julius applied for a Palestine Certificate four months later. Two of his sisters fled as well, later during the 1930s. Else stayed behind with the parents in Oberhausen. They were deported in December 1941 and perished in the Riga ghetto.

In 1934 Julius was one of 8.497 German Jews who immigrated to Palestine legally. That year almost 37 per cent of the Jews fleeing Germany, settled in Palestine. On 16 January 1934 the Amsterdam office of the Jewish Agency issued a so-called Palestine Certificate to Julius (read more on the history of his aliyah here). In Haifa he joined the armed defence forces Haganah and married Mal(k)a Friedmann. On 1 September 1935 their son Yitzchak was born.

Julius arrived in Palestine at a time when the port of Haifa was ready for use. His future – and that of some of his descendants – would be tied to this port. In 1933 the deepwater harbour had been completed, and in 1934 the pipeline bringing crude oil from northern Iraq. Construction of a refinery started in 1938 and production of refined petroleum products began in 1940. Julius was among the first employees, starting as a plumber-installer; later he was promoted to foreman. By 1947, the refinery employed some 2,000 Arab workers and 400 Jews.

Israel proclaimed its independence on 14 May 1948 but for Julius this came too late. He had died four months before in a terrorist attack, 45 years old. Julius was one of the victims of the ‘Haifa Oil Refinery Massacre’. On 30 December 1947 at 10:20 in the morning, members of the paramilitary organisation Irgun threw two grenades at a crowd of some hundred Arab day-labourers outside the main gate of the refinery. Six people were killed, fifty wounded. A few minutes later Arab workers in the refinery compound set upon their Jewish colleagues and attacked them with anything they could lay hands on. The attack lasted some 75 minutes uninterrupted and resulted in 39 dead and 51 wounded Jewish workers. Julius was one of the dead. His Hebrew obituary honours him as a quiet and withdrawn man, dedicated to his work.

JULIUS III
Julius III was one of the grandsons of Levi’s younger brother Moses Löwenhardt (b. 1841). He was born in Dortmund on 18 January 1907. His father Sally (1872-1936) was a railway guard. Julius III grew up in Dortmund but every summer his parents sent him with his two brothers to the family of a sister of his maternal grandmother in Holland. She was married to Philip (‘Wijn’) Philips in the small rural town of Hengelo (Gelderland, Netherlands) and the couple had no children of their own. Wijn Philips ran a butcher shop at the Raadhuisstraat.

And so the three boys were in Hengelo during the Summer of 1914. Julius, the youngest of the three, was seven years old. When in early August World War One broke out, they had to return home in haste. But a few hours before their departure from Hengelo, Julius fell from an apple tree and was taken to hospital. His brothers left without him. Since the three boys travelled on a joint passport, once he had recovered Julius was not able to return to Dortmund. He stayed in Hengelo all through the war. In 1918 his parents came from Dortmund to fetch him – but both the Philips family and Jules, as he was now called, preferred him to stay. And so Julius III started his life in Holland, the outcome of an accident. In the Summer of 1934 he received Dutch citizenship.

Since Butcher Wijn and his wife Bertha Philips-Böninger had no children of their own, they wanted Jules to inherit the butcher shop. Bertha died in 1931, Wijn in 1936 when Julius was 29 years old. He had studied at a business school and he had no appetite for being a butcher. Jules sold the butcher shop after Wijn’s death and for some time earned a living in the cattle trade.

In 1932 Jules had married Rosetta Samuel from Deventer. Their daughters Betty and Griete had been born in 1932 and 1935. They lived in Hengelo and by the end of the 1930s had gradually estranged from Jewish life. During the German occupation all four family members were in hiding, at different locations. In May 1945 they were reunited and in September 1948 the family moved from Hengelo to Deventer.

During his period in hiding, 1941-1945, Jules had falsified documents for the resistance and had taught himself in accountancy; soon after the war he passed his examination. For the rest of his life he worked as an accountant and tax consultant. Soon after the war, Jules became a member of the social-democratic Labour Party (PvdA, founded in February 1946). In May 1948 he sent the party leadership a letter on the issue of restitution in the party programme. Three years after war’s end, the few surviving Dutch Jews were still suffering from the loss of the properties they had been robbed of during German occupation. The government and parties were passive on the issue of restitution and, Jules argued, few surviving Jews had the means to start legal battles to regain their homes, insurance policies or pre-war bank balances. Jules made a disinterested plea for the PvdA to advocate their interests.

In the 1950s Jules was chairman ad interim of the Deventer soccer club Go Ahead. He died in 1971 of a heart attack, the year in which his soccer club changed its name into Go Ahead Eagles.

JULIUS IV
The fourth Julius Löwenhardt was born in Duisburg, Germany, on 31 January 1908. He was the youngest of the two sons of Max Löwenhardt (a brother of Julius I, Siegmund and Hermann) and Henriëtte Phillipps. Father Max, mother Henriëtte, brother Leo and his family: all six were deported from Bremen on 18 November 1941 and murdered in Minsk. The adventurous Julius IV was the only survivor… presumably.

Julius’ life and destiny are shrouded in mystery. On 8 September 1948 he was officially declared to have died on 28 May 1945 – but on 15 October 1959 he, or a person claiming to be him, gave testimony that in 1933 he had emigrated from Germany. German civil records document that on 30 July 1931 he reported to have moved in with his parents at Donaustraße 59 in Bremen, coming from Marrakesh in Morocco. The same records show that he lived at this address until 5 April 1921 when he was a mere 13 years old.

Other information comes from the compensation (Wiedergutmachung) application dated April 1962 of which it is not entirely certain that Julius himself wrote it. Julius was claimed to have lived with his parents in Bremen at least until 1921 – which matches the data in civil records – and later in Haguenau in the Alsace and in Mühlheim. Haguenau is to the north of Strasbourg in France, to the west of the German city Baden-Baden. He is said to have become a French citizen. From 1932 he was travelling (auf Reisen) and was in Marrakesh, Morocco, for some time. After WWII, in the 1950s, he claimed to have lived in Israel for a while. There he adopted his Hebrew name, Jaacov Lev-Ary. In 1957 his Tel Aviv address was Ben Jehuda Street 28, later Sderot Har Tsiyon 24; in January 1960 Julius lived at Akiba Street 28 in Haifa.

This Julius Löwenhardt is not listed in either the online Holocaust victims Memory Book (Gedenkbuch) of the German Bundesarchiv or in Yad Vashem’s Central Database of Shoah Victims. This in itself is an indication that he did indeed survive. But where, when and how is difficult to say.

Thanks to Ze’ev Bar and Ben de Jong of Amsterdam and Menachem Löwenhardt of Haifa; and to Heidrun Eberle of Bremen, Germany, for conveying details from the compensation application of Julius IV.