The Löwenhardt family name since 1840

Very few Dutchmen carry the family name Löwenhardt. The 1947 census counted six: three people in the province of Gelderland, two in Overijssel and one in Amsterdam. 1 Sixty years later in 2007 the Meertens Institute counted eight Löwenhardt name carriers. I count ten, both in 2007 and in 2013. Three of these  are living abroad temporarily.

The name hails from Hemer, a town to the East of Iserlohn in Arnsberg county, Nordrhein-Westfalen. By 1831 local Jews started to adopt an Übername or ‘overname’: a German sounding family name. Up to then they were known by their first name and their father’s first name as adopted at the brit mila (circumcision) in the case of boys or first synagogue visit in the case of girls: Yitskhak ben (son of) Abraham, for example. Whether my great-great-grandfather Salomon (Samuel), born in 1792, had a family name during his youth is to be doubted. He probably was the man who adopted the Löwenhard family name, yes: with the two dots over the o (the umlaut) but lacking the final t.

Whether the Löwenhard(t) family name has meaning is unclear. The name should certainly not be read as ‘heart of the lion’, for a lion indeed is a Löwe in German, but a heart is a Herz. Löwe can be traced back to Jehuda/Juda in Bereshit (Genesis) 49:9 גּוּר אַרְיֵה יְהוּדָה – Juda is a lion cub. Possibly the first name of Salomons father had been Jehuda and he himself had been named Shemuel ben Jehuda at his circumcision.

The situation in the city of Paderborn is well documented. A few years ago historian Margit Naarmann listed all Jewish Paderborners during the decades leading up to Word War II. 2 She found four persons (a nuclear family) by the name of Löwenherz. But she also found Jews by the names of Löwenbach, Löwenberg, Löwenheim, Löwenstein (most frequent), Löwenstern and Löwenthal. Not one single Löwenhardt, with the exception of the brothers Julius, Siegmund and Hermann, grandsons of Salomon, who had been sent from Hemer to the Jewish Orphanage in Paderborn and lived there during the first years of the Twentieth Century.

There is no doubt that in the mid-nineteenth century Salomon Löwenhard was a member of the Hemer Jewish community. There simply was no choice: the Prussian state did not allow any ‘unorganised’ Jews. Hemer had only a handful of Jewish families and the state classified them to the synagogue of nearby Menden. The Hemer Jews would have preferred to be classified to the Iserlohn synagogue as the walk to that building, six kilometres, was two kilometres shorter than to Menden. But they did not get their way.

Salomon and his wife Prinz Moses had three sons. The first born in July 1840 was my great-grandfather Levi. In December 1841 came Moses. And on 5 August 1843 Salomon reported to the town authorities that on 28 July at four o’clock in the morning his wife Prinz had delivered a son named Joseph. I received a Xerox copy of the handwritten birth certificate. In elegant writing the office-bearer reports that

That it was really a matter of religious prohibition and that Salomon was no illiterate is shown by a document dated November 1846, which he did sign. In this document the Jewish family heads of Hemer confirm the family names they have either chosen themselves or accepted from the authorities.

On 31 October 1845 a Prussian statute had ruled that all Jews were to adopt a family name. If one had been selected voluntarily, the name could be kept provided it was approved of by the authorities. Salomon was in this last category: he already had chosen the family name Löwenhard. An 1840 document and two documents dating from 1846 testify to this. On 15 July 1840 Salomon signed the birth certificate of his first son, Levy, using the family name Löwenhard – with the o-umlaut but lacking the final t. 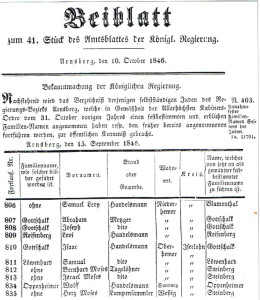 Salomon was one of ten Jewish family heads in Hemer in 1846. That year his three sons Levi, Moses and Joseph were six, five and three years of age. The Jewish family names were published on 10 October 1846 in a document dated 15 September 1846. 3 A month later they were confirmed by the family heads themselves. On 8 November these reported to a state office to put their signature to the official document. Three of them were illiterate (see numbers 4, 8 and 9 on the document). Not so Salomon. He was the second person to sign the document, using his first and family name. The names of the other Jewish families in Hemer were Gottschalk, Steinberg, Reifenberg, Blumenthal and Oppenheimer.

The largest number of Löwenhardts lived in 1940 on the European continent and the British isles. The online ‘Memorial Book’ (Gedenkbuch) of the German Federal Archives has data on 27 persons with the family name Löwenhardt who had been living in Germany and were murdered by the Nazis. I have found that list to be incomplete and furthermore, not all Löwenhardts killed during the war can be traced back to our progenitor Salomon. Three of Salomons grandchildren were living outside Europe and were not affected by the shoa. These were Clara Löwenhardt in Uruguay and Johanna and Hermann Löwenhardt in the United States, three of Levi’s twelve children. However that may be, by 1946, a century after Solomon had registered his name, only a handful of Löwenhardts were still alive.

Löwenhardts in the 21st Century

These days one finds carriers of the Löwenhardt family name in The Netherlands, Israel, Germany, the United States and Canada. South-Africa has at least one ‘no-longer-Löwenhardt’ who was born in Dortmund in 1924 by the name of Hans-Georg Löwenhardt and who fled to London with his younger brother Alfred when he was fifteen. Once there, they deleted the umlaut and the last six letters from their name. Harri Löwenhardt, born in Plettenberg-Eiginghausen in 1907, also fled to England and changed his name to Loyd. Many of the German and American Löwenhardts have converted to Christianity.

But all still write their name with –dt at the end. Historical sources indicate that the closing t was added to the family name shortly after Salomon had it registered by Prussian officialdom. The situation concerning the writing of ö or œ is less clear. One would think that this has to do with the Aglo-Saxon language not knowing the ö. Germans landing at Ellis Island had their family name written down by immigration authorities with œ instead of ö. However, the contemporary German branch of the family also spells its name with œ – even though their most famous scion wrote his name with ö. This was Erich Löwenhardt, the only Löwenhardt ever to received the highest German distinction, the Pour le mérite. 4 Erich was not a descendant of ‘our’ Salomon and the relation between the contemporary German Loewenhardts and the Dutch-American-Israeli branch is, for the time being one hopes, shrouded in mystery.

Sources show that Siegmund, father of the aforementioned Hans-Georg variously used ö and œ in the PR for his store of fine men’s wear in Dortmund-Hörde. And in books from the estate of Heinz Löwenhardt (1913-1989) one finds the same. With great reluctance I have to conclude that there seems to be no logic or regularity to the use of ö or œ… it does not seem to matter. And that is precisely why this author clings to his ö.